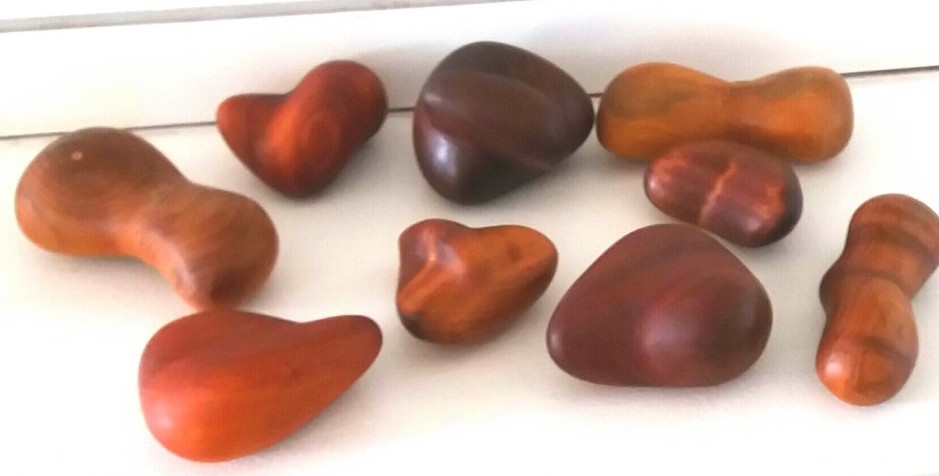 A visitor to my website likened my hand carved hearts to Native American worry stones, which prompted me to do a little research that helped me to understand the success of the hearts and why the psychologist was presenting her patients with my glassy smooth hand carved hearts for cognitive behavior therapy.

Recent scientific research has discovered some incredible emotional and physical health benefits that come from touch; these studies dealt mostly with human touch but my customers and recorded ancient customs have proven that it not only applies to the human touch but also touch forms, be it stone, ceramic, glass, or other materials.

“The more we learn about touch, the more we realize just how central it is to all aspects of lour lives-cognitive, emotional, developmental, behavioral- from womb into old age, it’s no surprise, that a single touch can affect us in multiple. Powerful ways” –(Maria Konnikova-The Power of Touch)

“Touch signals safety and trust, it soothes. Basic warm touch calms cardiovascular stress, it activates the body’s vagus nerve, which is intimately involved without compassionate response, and a simple touch can trigger release of oxytocin, aka “the love hormone”–(greatergood,berkley.edu)

I must thank the visitor for inspiring this blog by him introducing the subject of the worry stones. It is reported that Native American Indians carried stones in their bag or pouch and than handed them down to the younger generation in the belief that the younger generation would have a link to their ancestors, who they can ask for help during tough times. It was the ancestors who discovered the stones, by picking up a very smooth stone from the dust and started fiddling with it.

Touch forms were not limited to the Native Indians. The Buddhist and Christian traditions also played with stone beads in the form of rosaries or prayer beads which are rubbed between the fingers during special prayers.

In  the principles of cognitive behavior therapy, worry stones help to support meditation and self-soothing exercises. They also help to counteract negative comforting habits like picking at something on the skin, pulling the hair or biting lips or nails (moonlightshop.com).

Just as my touch forms or hearts served in helping my fellow students to quit smoking. Worry stones and other touch forms help to release physical tension, ease worries, and anxieties, as did the relaxing use of the hands, instead of reaching for that cigarette.

Only yesterday, a couple visited the gallery and sternly instructed their children, two young girls, not to touch anything, as they were happily fondling the hearts that were on display. Naturally, I informed them that it was ok to play with the hearts. My 27 year-old daughter and 32 year-old son still travels with a doll or a blanket from their childhood. I know much older adults that still does the same.

There are many cultures, especially in Arab culture that has some kind of touch form, be it a strand of material, a worry stone, a strand of beads, or even one of my handheld art forms, for the sole purpose of relieving stress and anxiety.

Thanks so much for sharing this amazing article, it’s very true that the power of touch supersedes any other form and it’s been a very long time tradition to have this topic in the book of high relevance. I actually didn’t know so much about this specific topic and this is about the third time I’m coming across it, but this article has made me understand how important and interesting it can be, thanks for sharing it.

Thanks for visiting, I am happy I was able to help, Do you own a touch form? All the best.

If I’m to be sincere, I don’t really have much belief in these things but I always appreciate when people feel close connection with whatever they claim to belief and it’s never anyone’s  right to dispute it. This really is comprehensive and you’ve explained the necessary about the healing power of touch. I have a friend who takes a stone like the one you made mention of around, at first it was awkward to me but when I understood its significance, I knew how it is. Thanks for this information, it’s helpful.

You might not understand until you experience it. Dir your mom give you a dummy as a kid, did you ever get attached to anything from your childhood; think about it, there might be something you are not aware of. Thanks for engaging. Best wishes.

Well! I always believe in what you have the faith and the believe in, then whatever you wish with it, then it will happen. I believe in that people carry about things that they need in building up and maintaining their strong faith and believe. this is really great. Though I learnt in some part but now, I am understanding the concept better.

My therapy is seeing the pleasure my work brings, along with the joy of creating. I am happy about the introduction of worry stones. gave me a lift. Thanks for your contribution to the discussion. Best wishes.

To me, this was worth my time spent reading because this is very great and worth wile. For me, I am not just anybody  for believing in what they believe in. Sometimes back, I always carry my late mom’s necklace and with the conviction that i can pray through it. I know of the Asians using rosary and all. Well! this was a good read

Touch is the way, we express our love, sympathy,and care, to our loved ones,and helps them to respond,to our empathy for them,and signals safety and trust to them,when they need it.

Prayer beads, help us to keep in touch with God, and remind us of His loving presence, and loving touch, through the prayers linked to the beads, which remind us of His great healing power,and mighty deeds.

The worry stones,are the American Indians link to their ancestors,helping them to keep close to them,and be encouraged in times of stress,giving them strength to cope in times of trial.

Many people, keep objects of loved ones,family or parents,such as a lock of hair,a photograph,a mother’s necklace, to encourage them,and to relieve stress, in times of trouble.

You can add my hearts to the list for thousands of patrons. Thanks for the visit. All the best.

Good content from a believer in the power of touch.

There is no doubt that a simple touch conveys far more than even a hug or cheek kiss. The use of Crystal quarts
has also been linked to fortune and luck as well as religious artefacts, For example, St Christopher medals and Cross emblems emblazoned with figures of Christ or Mary etc used with several religions.

I have learned with 12 grandchildren aged from over 30 to under 10 that a simple touch connects far better than any other form, they have all followed the theory and return the favour many times.

Very interesting additions, I wonder how much depends on the power of the mind. Touch definitely is a strong factor. Thanks for your contribution. Best wishes.

Time for a Change

When your Work is your Passion

How to Make a Living as a Full-time Artist

I Am Retired, Don’t Ask Me to Do a Damn Thing!

Join us on our social media: