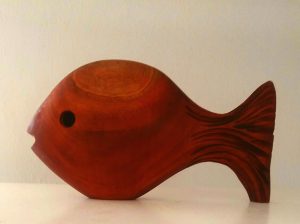 A Boost For The Gallery And Gift Shop.

Business to the hotels was encouraging; I was meeting some managers socially at a night club where my brother was the DJ. During our conversations We would sometimes talk about the gallery, and the needs of the hotels in making the interior decor relevant to the local culture.

The first large order was for ceramic candle shades to be used in the restaurants and around the pool decks; They created a very romantic and tranquil atmosphere.

The orders came from a chain of four hotels on the south coast; the orders were substantial and really boosted our cash flow; at this time I was getting my ceramic supplies from four different potters from Chalky mount, my home district and they all knew me from childhood. I would control the design and color, which was limited,

There was a supply of copper sheeting on the Island, I was inspired to create relief sculptures of beaten patterns, One of the managers was impressed with my work and asked if I could make some hanging and free-standing lamp shades, using similar technique. The hotels are on the beach and the sea blast was reaping havoc with the commercial shades.

Copper was not cheap and neither was my labor, but it was still affordable enough to place orders for 3 of the hotels; This collaboration strengthened my ties with the hotel managers; then came the big break that sustained me for years after.

None of the hotels had gift shops, they wanted the guests to spend most of their money at the hotels. I was invited to set up a pop up shop once a week at each hotel, we would set up tables around the pool close to the beach; this meant we not only had access to the hotel guests but also other tourists who were visiting the beach or visiting the hotel for lunch.

The weekly popup shops served as excellent publicity for the Devonish Gallery; many of the guests were curious enough to visit the gallery to see what else were available.

Help had to be sought, hotel managers saw our displays as entertainment for their guests, and the invitations kept coming; where we could have had a display every day of the week, if we desire.

We kept it to weekends and one day midweek; sometimes we did well, sometimes not so well; but the only overhead expense was our time. The hotels charged us zero. What a lucky break that was, gallery sales were on the up and we were doing sales at the hotels every week.

It was at one of these hotels popup shops that I met a famous English Actor, He was sitting alone at the pool bar, it was a fairly quiet day. He walked over to me and asked, :How much money do you make a day at these displays”

“It depends on the number of people and how deep are their pockets”; I have grown to understand that not all tourists have lots of money or spend large sums of money.

“I will tell you what; I will make it worth your while if you close up shop, and sit at the bar and have lunch and a few drinks with me”

He bought the major sculptures I had on display, and that was the best sales I ever had on any given day. We chatted about my experience in England, one of his films I had seen in England and other small talk about the Island. There was always a bottle of champagne in the ice bucket. We spent about four hours together, I realized that he was fond of his drink from the speed with which the glass was being emptied, so I was cautious and sipped slowly.

Luckily the hotel manager knew where he was staying, his behavior was becoming a little unruly, as he tried to flirt with a very attractive young lady who joined us at the bar.

There was a taxi in the parking lot and the manager, with some resistance, sent him on his way.

My drinking companion had provided me with the details as to where to ship the sculptures; he had added enough cash to more than cover the shipping. I did not hear from him or see him again during his stay on the Island.

Those weekly displays kept us in business; Gallery sales were improving, but I can’t say it was enough profit to write home about.

An offer of another making was in the works; one I could not ignore.

There was a chance conversation with another Englishman who was a captain in the British Army; he was a frequent visitor to the Beer House; he invited me to spend one Sunday afternoon with him at the hotel where he was staying.

The hotel was a historic hotel on the south East coastline of the Island, quite a distance from the bulk of on island hotels, namely the south and west coast of the Island. Many locals and tourists alike visited the hotel for its scenic view and its history.

The owner was an Englishman also and a close friend of the captain. The sea blast on that location was very troublesome, everything rusted.

While having a drink at the scenic bar, the hotel owner joined us, he was aware of the gallery and my connection to pottery and ceramics. He showed me the problems he was having with rust, he had seen my designs in both copper and ceramics, and placed an order right then and there.

“By the way would you like to open a gift shop on the premises? It would be an added attraction for the hotel, and for that I will offer it at a reasonable rent”

The small building was at the entrance to the hotel and no more than 350 square feet; It may have been one of the servants quarters years back. I had to think about it, it would mean hiring a manager that was trust worthy, because I would only to able to visit the location once or twice per week.