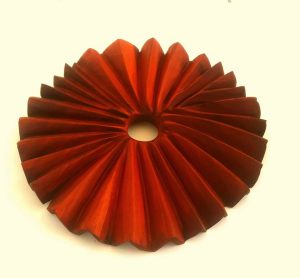 The decision was made, the rent was reasonable, as the owner saw the gallery/gift shop as an additional attraction for the hotel.

The hotel was a small and expensive with limited rooms; but what sealed the decision was the fact that the beach near the hotel was a popular excursion location for locals; who also visited the hotel for their Sunday brunch and a day out with friends and family. Secondly the hotel had a history, plus the view from the restaurant was spectacular with violent white foamy waves lashing against the rocks; the area for swimming was very limited but with dangerous undercurrents.

There were warnings on the beach and a life guard was always on duty, there were some drownings of locals and unsuspecting tourists, who did not heed the warnings; The temptation for surfers offered an exciting challenge.

My choice of advertising was through the Taxi drivers, at that early stage in the life of the gallery, locals did not feature heavily in the sales; but that changed at an unfortunate time for me, and that is when I was moving to Anguilla after 18 years in operation.

The taxi drivers were given fliers and offered a 10 percent commission on any sales generated as a result of they bringing tourists to the gallery/gift shop. A large percentage of tourists visiting the Island would take a round the island tour by taxi, The hotel was one of the most popular stops on the island tour; so it made sense to engage the Taxi drivers. The scheme turned out to be very successful, for both the business and the taxi drivers.

The challenge was adequately stocking two locations and continuing the displays at the west coast hotels. New craft suppliers were sought; which meant one day a week had to be earmarked for collection and purchases.

I had my first unfortunate experience with one of my consigned artists, which was the beginning of a challenge of how to manage your relationships with artists, who on a whole can exhibit very selfish tendencies.

A customer admired a painting that was hanging in the gallery, but wanted a discount. He was informed that I would have to consult the artist, which was done and a discount was offered. The customer was not satisfied with the discount, and approached the artist, without my knowledge; apparently he inquired of the artist what was the gallery commission and offered the artist a slightly better price, if he would take the painting from the gallery and sell it to him personally.

A few days after I informed the customer what was the best discount the artist had offered; the artist came to the gallery and asked if he could borrow the painting for a few days, and he will return it,

The artist did come back, but with a different painting; what he did not know was that the customer came back to the gallery and remarked ” I told you I can get it for a better price”

My comment to the artist was to bring back the painting he took away; if he couldn’t he will have to take the other three paintings on the wall and don’t ever come back. That was the end of the gallery relationship with that artist.

Only one sales manager was needed, the space was small and manageable; The successful applicant was informed that I might only be able to visit the location on Sundays, which was a busy day at the hotel; we closed on Mondays.

The operation was going well, sales were satisfactory and I was full of praise for the young lady; until a customer came to see me at the Bridgetown location, and asked a very pertinent question-“why are your prices higher at your second location”

Learn how to Promote your Art/Craft Online by clicking on the sidebar.