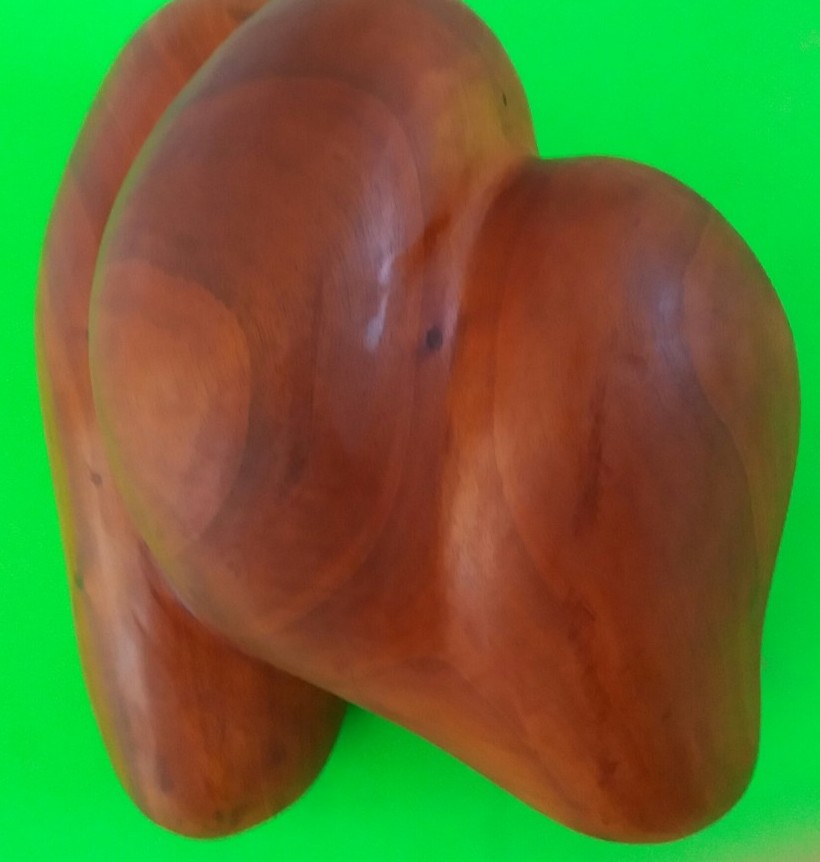 Members of my family have been Potters for generations; the name Devonish in Barbados was synonymous with pottery. Most of the practicing potters in the Devonish family are long gone, and younger members have immigrated to greener pastures.

I never dreamt of being an artist, but my father was a farmer, he kept domestic animals, sheep and a couple cows, which we tethered in a parcel of land about a mile from our home, we lead them to the pasture every morning, and brought them back every afternoon.

On the way to the parcel of land we had to pass the workshops of five of the potters, all members of the family, my father was not a potter, my mother was a house wife with 9 children.

The land had fruit trees, mangoes, guava, cashews, and “fat pork” I don’t know where that name came from, but it sounded sexy, In Anguilla there are called cocoa plum.

Some times we would go for the animals early in order to gather some fruit, and spend some time on my hobby.

There was a small stream running through the land, along a gully, through a small village and into the sea.

Along the river banks was a supply of beautiful very plastic red clay; I would spend time modeling birds with the red clay, place them on the rocks to dry, until the rain would come and wash them away. Little did I know that modeling those birds would lead me to become an artist one day.

My favorite potter was more than a potter, he was a true artist, he sculpted figurines, and portraits, he was the only potter I would spend time with, pushing the shaft of his hand built potters wheel, it took the potter and an assistant to push the shaft to make pottery on the wheel. He was the inspiration for the little birds.

We did indulge in a little art in primary school, but never in high school; although a few students did ask the headmaster to add art t the curriculum, unfortunately he did not have the foresight to know that art and music were strong forces behind academic achievement.

At age 18 I left the pottery village in Barbados after graduating from High school with GCE passes at O level from the Oxford and Cambridge examining board.

On arriving in England, I enrolled at the Coventry Community College to study Maths, Biology and Physics at A level, with the hope of studying medicine.

In the mean time I was offered a job as a trainee laboratory technician at the local hospital. For the life of me, I could not tolerate the sight of blood or vomit, I lasted a couple of weeks, and quit the job.

The entire family attended a Christian Brethren church ever Sunday, all 10 of us, Mom, Dad, eight sisters, one brother and myself; our last brother was still in Barbados at the time.

Every Sunday after church, the young people would gather for afternoon tea and fellowship, at the home of one of the elders of the church, who happened to be the Headmaster of a secondary school; God Bless him.

When I related my work experience to him, he right away said, “perhaps you should study to become a teacher, you already have the minimum qualifications”. This was in January, I wanted to complete my A level studies, in the meantime he instructed me to apply to be a student teacher, pending acceptance into a University or Teachers College.

Acceptance had to be within a maximum of two years, if not you had to give up the student teaching job. I did not know at the time that there were no Teachers of color in the city; the application form was brought to me by the church elder, and was promptly submitted to the education administration office.

My parents were excited when the letter arrived inviting me to an interview, and so was I. There were several applicants sitting in the waiting room when I arrived; was I nervous ? definitely I was nervous, but confident, I was in England less than 3 months and very unaware of the politics.

The interviewer sitting behind the desk was small in statue, wearing a pair of gold rim glasses; he did not even invite me to sit-he abruptly got up from his chair, invaded my space and barked-“who the hell tell you can get a job as a teacher in this city.”

“Why the hell did you invite me for an interview, I did not just walked in here” I replied.

He was definitely taken aback by my response; “sit down young man, sit down”

A cordial conversion followed, with the occasional awkward remarks, which I was not afraid to challenge.

The interview lasted about 45 minutes; Young man, I am going to stick my neck out, you are the only one here today who would leave knowing you have a job.