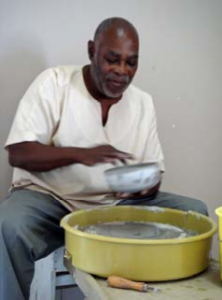 The gallery opened with a bang, the official opening was well attended and attracted much media attention, both print, TV and radio. Barbados was just beginning to meet the demands of its tourist industry. The restaurant opening was delayed due to the fact that I was searching for someone who was a good home- cook. The draft beer supplies were also delayed. My target market was government and office workers from the many city businesses, such as Banks, Insurance companies, Department stores and the like, with tourists patronage as the gravy.

However, I tailored the bar to cater to cruise and naval ships that called into the Barbados Deepsea Harbor on a regular basis. Export agents of Whitbread Draft beer in the UK were contacted to supply the restaurant with the necessary equipment and supplies for serving draft beer. This was a first for the Island, making the Beer House the only restaurant serving draft beer on the Island.

In addition to draft beer, the suppliers of beer in the Caribbean were researched for imported Foreign Beers. Orders were secured for the ones that were available. The German beer Lowenbrau, Whitbread Draft along with our own local Banks Beer became the most popular beers on our menu.

The first shipment of Reggae music, mainly by Jamaican artists living in England arrived on time. An economic arrangement ( info -mercial ) was arranged with one of the local radio stations to host a reggae chart under my management. For the opening night we had invited a number of the popular local DJ’s.

Village dances were a popular entertainment feature of the local culture at the time; Organizers could not afford live bands so they hired DJ’s, there was lively competition as to who was the hottest DJ with the latest sounds. The Reggae tunes were advertised via the chart program, and it worked like a house on fire.

In addition to my own Art there was a collection of local pottery, bought from the chalky mount potteries, another first for the Island that started a trend with gift shops and one department store in particular. There were several potters in Chalky Mount, but only three of the potters met my standards; one was a cousin who was in my opinion the best potter in the village, his work was neat, but like all the potters, the colors were limited as they were not trained in the finer aspects of ceramics; most of the glazes were lead glazes,

The only food containers had to be un-glazed, although the potters sold many goblets, mugs and casserole dishes that were decorated with lead glazes.; the local monkey or water pitcher were safe to use. Many homes in Barbados at the time did not have refrigerators; the homes had a triangular shelf about four feet high in a corner with a monkey full of water  for serving cool or cold water.

The second potter was chosen to meet the quantity of pottery required for the space reserved for the display. .r but he was engaged to supply two items only, candle holders and ashtrays. Efforts to engage the potters about the dangers of lead glazes failed miserably; one potter in defending the use of lead placed a little dust on his tongue to prove his point.

Mr G. was the artist in the group; he was willing to experiment, and offered a more variety in design and color;He was the first potter to introduce sculpture by modeling birds and figurines. He even tried his hands at portraits, which was my first inspiration towards being a sculptor. He would later become the master potter for COD Pottery and Ceramics; a workshop I established a few years later.

Humor was not lacking from this potter, it was an unusual sense of humor and  he was the only potter that smoked cigarettes. During my childhood days when I chose to watch the potters at work, he was always my first choice,

I can distinctly remember to this day; I was in his workshop pushing the wheel for him when a tourist walked into his workshop wearing a white suite; Mr. G immediately stepped down from the push wheel and offered his dirty red slip soaked hands to the gentleman to shake, which he did as Mr. G put a little more energy into the hand shake;

“Oh so sorry sir, I was so excited to see ya that I forgot the clay”

After the now white and brown suite tourist left the studio, he remarked with a cheeky grin on his face

Pottery wheels in those days required two people for operation,  the potter and an assistant to push the handle in order to spin the wheel.

The gallery was on a busy street with several betting shops and ironically, the bus stand for the N0 5 public buses whose final destinations were Chalky mount and Bathsheba, The areas very familiar to my childhood days, Chalky Mount being the village of my birth and the pottery village of Barbados.

Three local artists were selected to submit paintings on consignment with a 35 percent commission. A selection of local arts and crafts were bought cash.Our most popular and reliable craft supplies were, wall hangings,  handbags and placemats by a well-known Barbadian weaver Roslyn Watson who later became a dear friend and partnered with me in featured exhibitions.

The ladies in the chalky mount district made place mats from the leaves and roots of a ocal plant; I undertook to buy all they can produce but they could never make enough.for the demand.

There was one wood turner whose work I admired, he also made some handcrafted painted souvenir wall hangings that were popular with the tourists, they included palm trees, dancers and steel pan players.This wood turner also became a close friend until his death.I lost the battle in getting him to reduce his consumption of alcohol.

The gallery was all set to go, now we were anxious to get the restaurant opened as I was perfectly aware that it would take some time to generate enough business to be sustainable; The restaurant would provide the necessary cash flow to support the gallery.

10 thoughts on “How To Survive As An Artist & Entrepreneur- 2”